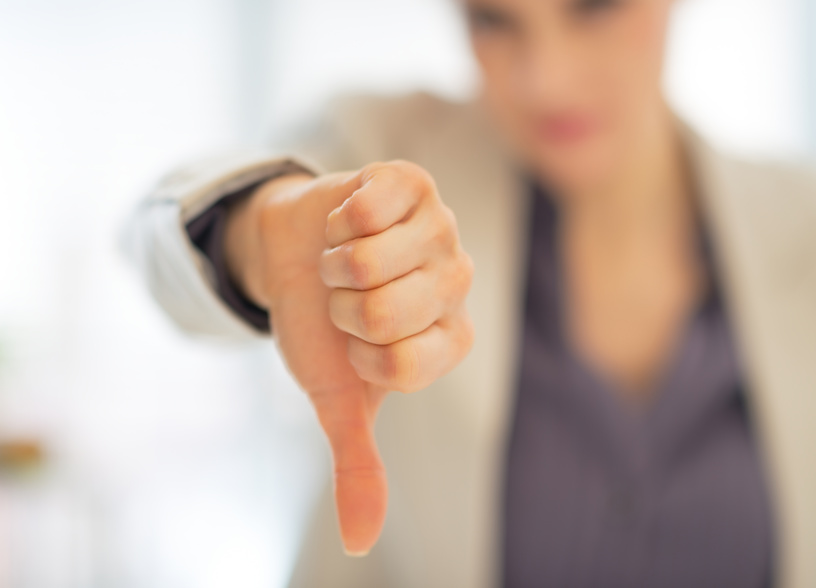 “I wanted to eventually promote Jane to a Senior Product Manager. But I guess I went about it the wrong way. Because she quit,” Melissa confided in me.

Melissa became disappointed in Jane’s performance, especially in how she related to other the people in their medical device company.

“All I wanted Jane to do was to be nicer and less demanding of the other team members working on the heart monitor,” Melissa explained.

“So I simply told Jane “Too often, Jane, people come to my office to complain about you. They say you’re abrupt. Or unkind. Or insensitive.” She could be all that. Once, at the end of a meeting, without consulting any of her peers, Jane just said “Okay, I made a chart of who should do each of the tasks to finish the newest monitor on time. Your name and your tasks are here. So I guess the meeting is over. Let’s go back to work.” She didn’t understand why that upset people. Can you believe it?””

Yes. I believed it.

When you’re disappointed in someone you work with — especially if you’re the manager — it matters how you break the news.

From other things Melissa had told me about Jane, this woman who reported directly to her didn’t have a reason to be angry and lash out at her colleagues. So I understood that Jane’s comment was almost certainly not said in anger. I was inclined to give her the benefit of the doubt for her behavior, as Jane tended to get right to the point. But did sometimes inadvertently treat people in ways they found dismissive.

Yes, Jane sometimes missed the social cues and pleasantries. But not always.

On balance, Jane’s talents outweighed these social concerns. She was well-known for her efficiency. Jane constantly managed schedules to avoid delays. If one team member was going to be late, she eagerly and pleasantly engaged another team member to help things stay on track. When schedules got tight, Jane regularly rolled up her sleeves to pick up other team members’s coding or design work.

When you’re dealing with poor performance, ask yourself: Do this person’s strengths outweigh their shortcomings?

So Melissa was eager to move Jane up a level, to Senior Product Manager. Jane started off being reluctant to take on greater responsibility, and admitted to Melissa, “I don’t know if I’m talented enough. But, OK. I’ll do it for the company.”

Here’s the clincher: After Jane returned from a 2-week vacation, she walked into Melissa’s office and declared, “I can stay until the end of the week. I didn’t want to be a disappointment here anymore. So I’m starting a role at a new company next week.”

When Melissa pressed her for her reason for leaving, Jane aid, “You told me not only were you disappointed in me, but the Engineering manager and the Quality Control director, and a few others were disappointed in me, too. I’m always doing my best. How am I supposed to make things good again? My reputation here is ruined!”

Melissa told me, “I didn’t realize Jane’s feelings were so hurt.”

Then she asked me, “What could I have done differently to have retained Jane?”

I’ll share with you what I told Melissa. When someone you manage is not meeting your expectations, yet they’re valuable to your efforts, here’s my four-point plan to help them:

Melissa had an expectation that Jane should treat other team members in a way that came across as respectful and collegial. But Jane wasn’t meeting that standard.

To rectify that, Melissa could have described “the gap” between her expectations and the behaviors Jane was actually modeling. It’s also helpful to explain why the expectation exists — what it’s intended to accomplish.

In other words, Melissa might tell Jane something like, “My expectation is that everyone at a peer level on the team will check in with the other people on the team before assigning them a task, so you demonstrate respect and collegiality. Perhaps if you were more senior, you could simply assign tasks without that check-in. But even then, it’s considerate to check in, because you may not know every person’s workload. From what I heard, you assigned your peers work. Can you see that? And can you understand why that might be upsetting to them?”

Melissa told Jane that others perceived her as “abrupt,” “unkind,” and “insensitive.” She asked Jane to be “less abrupt, kinder, and more sensitive” to her peers.

While this guidance may have been well-intended, it doesn’t specify how Jane can improve. It’s all about character, and how others are perceiving her. That’s hard to shift.

Instead, Melissa needs to articulate specific skills and behaviors she wants Jane to practice, or ones she wants her to avoid or eliminate, along with some context about why she’s making the suggestion.

For example, Melissa might say, “It’s helpful, when ending a meeting, to see if anyone else has anything to add. That way, people feel included and issues get surfaced. So next time you’re closing a meeting, Jane, I’d like you to try out asking in as warm and friendly a way as you can, “Is there any other issue that we need to cover before we wrap up, or something you want to ensure we put on next week’s agenda?” And then let’s check in and see how that works for you, OK?”

Sometimes, having a team member go to specialized training, or even read an article or a book, can help to develop the required skills or behaviors, so use those as professional development options.

If you merely tell someone about the gap in their performance and how to fix it, but you don’t stay in touch with them and check in to see how their behaviors and skills are evolving, that person may feel self-conscious, abandoned, confused, and unsure of himself or herself. Feedback is essential to making change.

So, Melissa could have set up some specific times — say every two weeks or so — to check in with Jane to see how she was faring with the skills and behaviors she was asked to practice. During those meetings, she could ask a number of open ended questions:

“How are things going?”

“What support do you need?”

It would also be helpful if Melissa talks to Jane’s peers and the others with whom she interacts, to see how she’s doing on the issues she’s been working to enhance.

Melissa can ask Jane is she’s open to hear what her peers are saying, with a question like “Would you be open to some feedback I’ve heard from your colleagues about how they’re experiencing you now?” Jane should be allowed to reserve the right not to hear, though of course it would serve her better to get this feedback. Melissa can also suggest that Jane ask her peers directly for their input; however, sometimes, people are reluctant to deliver bad news, so if things weren’t going well, that approach might not yield the feedback Jane desires.

Overall, when an employee is largely doing a good job, it’s important to share your encouragement, especially when you need to make the contrast with telling that person of your disappointment.

“You know, Jane, you’re doing a great job with keeping all your projects on track. All four of those you’re managing are on time. And on budget. From my vantage point, that’s hard to do. But you diligently watch what’s happening, and make course corrections as needed. I appreciate you for that, and so do your colleagues.

“And, I need to let you know about an area where you’re missing expectations…(she’d describe the gap, from Step 1)

“Now, it’s not all bad. Remember, you’re still doing great work with tracking all your projects. So I have full faith in you that you’ll close that gap soon. I’m here to help. Just ask if you want or need my support”

Of course, if you were in Melissa’s shoes, you might word things a bit differently. But you get the gist, right? It’s vital to demonstrate the gap, discuss how to close it, check in about progress, and give out encouragement.

Thanks for reading! Did you enjoy this article? Please click on one of the social media icons and share it!