The vital career lesson I learned by postponing a scary surgery 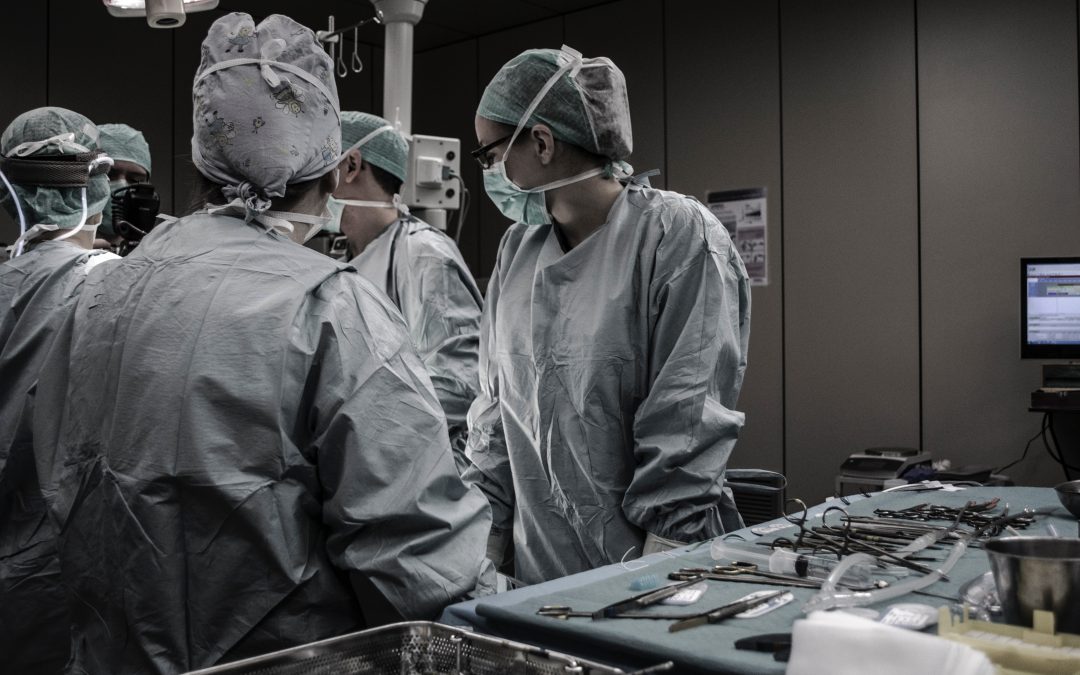 Have you ever been so scared of doing something that you just kept procrastinating?

Very recently, I learned a tough lesson about taking action, even when you’re feeling worry, dread, and anxiety.

While the lesson is related to my health, I see now how it applies to all facets of life. Especially career. I procrastinated a lot in my career, especially when I was unhappy. For example, after my MBA, I stayed in management consulting for five years, when I was certain after year one that I didn’t like it.

But even when something is bad for us, it can be hard to move away from it, into the unknown.

How I Tolerated Poor Health

I had pressure in my abdomen for years, but I was so scared of having surgery and getting cut open. So I put off getting treatment for over five years. Despite having a benign growth in me that kept enlarging, the thought of being in a hospital terrified me. I figured I’d just “live with” the condition.

Somehow, I put up with an ever-expanding belly, to the point where I kept outgrowing pants, and I couldn’t button up my shirts and had to buy bigger ones.

I was first diagnosed with uterine fibroids back in 2001. At the time, these smooth muscle tumors were teeny — the size of raisins. I had two of them growing inside my uterus. Upwards of 30% of all women have fibroids. Normally, they’re not bothersome, and nothing needs to be done.

Back then, my gynecologist said, “We’ll just watch these.”

Five years after that, I had three fibroids, the size of grapes. Still, “watchful waiting” was the idea. I didn’t feel them, and I had no symptoms.

But by 2008, I had three fibroids that, in total, were the size of an egg. I’d started to bleed pretty heavily during my monthly cycle.

Over the next five years, I started bleeding so heavily that I really didn’t want to leave the house during my cycle, for fear I’d have an ugly red accident. I had a new gynecologist, and on my first visit, she told me, “We need to do surgery, immediately, to get these fibroids out of you. I’ll get you scheduled for a hysterectomy next week.”

I panicked. Surgery? No way was anybody opening me up. It was just blood, right? I just bled more than the average woman, I figured. I emphatically said, “No surgery for me. And I won’t be seeing you again!”

Before I left, the doctor advised me, “I am concerned about your choice. But, whatever you do, please do get a blood test for anemia.” That was a good call. It turns out I was losing so much blood that my iron levels were dropping, making me feel fatigued and foggy-headed, and reaching for more and more coffee. I started taking iron supplements, and I started feeling better.

But the bleeding just escalated each month.

And strangers would walk up to me and say, “Oh! How wonderful. When’s the baby due?”

“I’m not pregnant!” I’d scream. And then, when they walked off, I’d cry from embarrassment and frustration.

I knew my body shape was changing. And every year, the ultrasounds showed the existing fibroids growing, and new ones emerging.

At Thanksgiving, in 2016, a close, long-time family friend who I’d see only at the holidays (who knew about the fibroids and was seeing the changes in me) took me aside. I imagined she was chastising me as she remarked, “You know, your posture is changing. I’m concerned about what those fibroids are doing to your body.”

I was so angry. How dare she tell me about my own body!

I Learned to Tolerate a Tough Situation (Instead of Treating It)

I tolerated practically hemorrhaging every month, feeling exhausted, mentally confused, and frequently feeling dizzy. My heart started to pound at night, and my general practitioner told me that could be caused by the fibroids, and the demands of replacing so much blood every month. I was losing oxygen in my blood, and my heart had to work harder. An echocardiogram showed some early signs of potential heart enlargement. I just took more iron, hoping it would stave off problems.

Finally, in October, 2017, nearly 16 years after being initially diagnosed, I experienced some serious abdominal pain. I knew it had to be caused by the fibroids. For the two years prior, my gynecologist kept being astonished that I was essentially pain-free with such large fibroids. I’d grown accustomed to the mild pressure on my pelvis.

I had another ultrasound that month. The technologist was flabbergasted at the size of my uterus. I also had a CT scan that showed I was essentially carrying around the equivalent of six grapefruits, six golf balls, and a bunch of grapes in my uterus. The total mass was the size of a 7-month pregnancy. I looked at the images and saw that my bladder and intestines were severely compressed.

“I don’t see how you can keep waiting on this. Let’s get you scheduled.”

I Prepared for a Positive Future

Given the holidays and my gynecologist’s schedule, I had to wait two months for surgery. In that time, I spoke to as many women as I could who’d had a hysterectomy. I read up on the procedure. I poured out my fears to women who’d been through this.

A friend who’d had the same surgery said to me, point blank, “You know, all I hear from you are your fears. You’re so worried about potential problems. What about visualizing how much better you’ll feel afterwards? What about imagining positive outcomes”

She’d given me an important wake up call to my mental state!

I made a list of the things I’d be glad about after surgery:  Not taking iron supplements anymore, so my teeth wouldn’t be stained and would be pearly white again. Having a more relaxed bladder and intestines. Relief for my heart. No longer feeling those strange bulges in my abdomen. And, well, having a flatter belly and fitting into my clothes again.

I started on a specialized eating plan to balance my hormones. I bought myself things I’d need in recovery, like a tray table so I could work in bed, and a comfy pillow to bolster me. Super soft sweat pants so I would notice the incision less. I even found someone to do medical hypnosis to help me allay my fears.

By the time I was wheeled into surgery at the end of January, I was as mentally, emotionally, and physically ready as I could be.

Thankfully, the surgery went even better than anticipated — it was faster with a smaller incision than originally planned. Fortunately, I have had an easy recovery.

Just over one month later, I feel like a million bucks! I fit into my skinny pants. I am breathing more deeply. My brain is super clear. I have tons of energy.

And now I think, “Why did I procrastinate so long? Why did I put up with such a low-grade awful state as long as I did?”

“Why did I procrastinate so long? Why did I put up with such a low-grade awful state as long as I did?”

But here’s what I realize that’s so important as a life lesson for anyone:  It’s all too easy to tolerate a lousy situation. But that ultimately strips your life energy and takes a toll. What’s needed? To create a positive vision of the future, and the action to move in that direction.

For me, I’d grown accustomed to the fibroids. I wasn’t willing to make a change, because surgery scared me. Even though there was the potential for better health, I put it off.

In the past, I got accustomed to the crazy long hours of management consulting, the time out of town, the intense demands of clients, the relentless pace. And even though I knew after the first year that it wasn’t a fit, I was afraid of trying to run a job search while working that hard. I was scared I’d never make good money again. I was worried about what other people would think. So for years, I stayed stuck in work I dreaded every day. I don’t recommend that.

Since I work with professionals in making shifts in their careers, I notice that people often keep complaining about work, but they keep doing the same crummy job for months or years, thinking, “Well, if I go somewhere else, it could be just as crappy.”

Are You Tolerating a Mediocre or Awful Job?

So, here’s what to do if you’re procrastinating about leaving a job that isn’t a good fit for you, and consciously creating your own career satisfaction.

(1) Ask yourself a vital question

I know it’s scary to start thinking of leaving a job when you’re not sure what you want to do next. None of us really knows what’s ahead. But if you’re in a situation that bothers you, grates on you, annoys you, even a little bit, it’s time to ask, “What new normal am I learning to tolerate? And what do I really want instead?”

(2) Start looking for what you do want, instead of what you don’t want.

It’s vital to be willing to create a new future comprised of what you really want, not what you’ve gotten accustomed to. Make a list of the things you want in a new role. And start getting excited about the possibility of a better livelihood — and life. If you start doubting that new vision is possible, stop and talk yourself down from your doubts. Doubts are normal and natural, but they’re just ideas. So dialogue with the doubts, and ask them to be replaced with excitement, with something to look forward to.

Keep building positive momentum to carry you towards what you do want in your livelihood and your life. Do some research on a new company or a new role or a new direction. Talk to people who’ve made a similar shift. Envision what you desire — whether that’s a new profession, a new company, or shifts to an existing role. And start figuring out even the teeniest steps to moving in that direction. And take them — like taking a class that will teach you a new skill. Visit a company that intrigues you. Go to conferences and mixers with people doing the work you desire.

Want the help and support to move beyond “tolerating” your work to really feeling satisfied in your career?

If you’re dissatisfied with your job, wondering what you want to do next, or thinking about how to make meaningful changes in your career, consider joining me for a transformational getaway to the Livelihood & Life Reinvention Retreat on the weekend of April 6 to 8, 2018 in gorgeous Nevada City, California (just an hour north of Sacramento).

Over the past 10 years I’ve developed and lead a supportive weekend that will allow you to create a compelling new vision of what work can be for you — an inspiring future that satisfies your mind, your heart, and even your gut!

Transform your career frustrations and fears into clear intentions and inspired actions,get the tools you need to make the changes you desire, and boost your confidence for shifting into a life and livelihood that truly fits you. Learn more about the weekend event that will rock your life and your livelihood in positive ways for years to come by visiting https://drsusanbernstein.com/april2018retreat